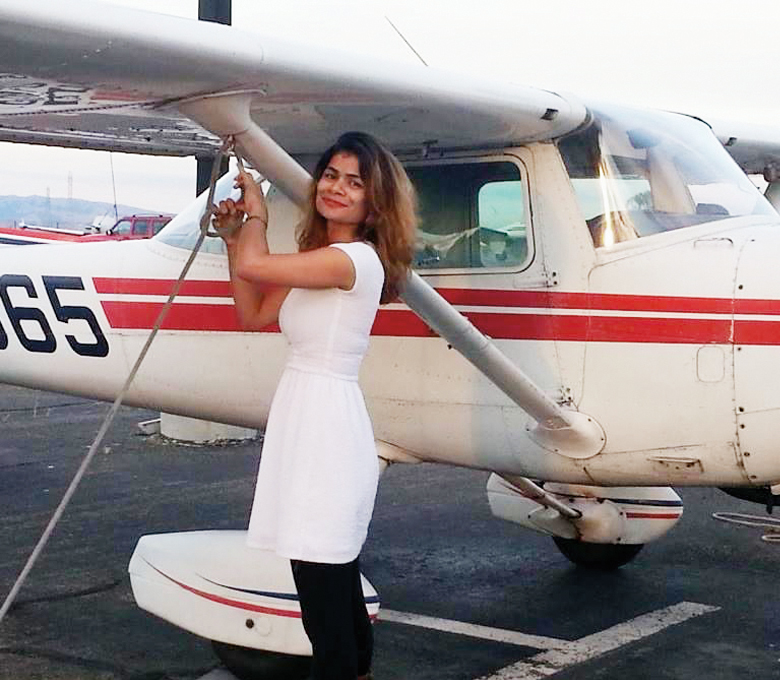 Meet Shraddha Chaplot, the new Innovation Coordinator at Saint Francis, who delights in finding wonder in the world around her. From flying planes to seeing mathematical concepts in small things, life is full of opportunities to explore. This year, Ms. Chaplot teaches Design Thinking and will work on forging relationships with organizations and businesses to provide learning opportunities for students.

“I love trying things out. I love adventure, and I feel that I don't have to be good at something to take a chance on it. I just want to play,” she says. “I love playing.”

An electrical engineering major from UC San Diego, Ms. Chaplot comes to Saint Francis after working for many years in high tech, with projects related to green energy and Internet of Things, which is a system of internet-connected devices that can generate data. Ms. Chaplot left Silicon Valley after eleven years, when she wanted to make a direct impact on the next generation. At Saint Francis, her role is a blend of teaching, partnering and creating in capacities that are still being defined, but one of her guiding principles as a teacher is to make certain that students start to discover their purpose and things they are passionate about, and understand how to apply what they are learning. Specifically, she hopes to impart lessons on how students can harness technology for good.

“I went into education because I wanted people to learn about the tools and technology that are out there. I don’t want them to be passive observers. I want them to be active participants and recognize that they are capable of making a change,” she said. (Ms. Chaplot is also the moderator of the South Asian Student Association affinity group.)

Ms. Chaplot’s love of engineering and imagination are constantly fueling ideas for hands-on projects. Recognizing that her first name is challenging to pronounce (Shruh-the), she created a handheld box equipped with a circuit that has a recording of her name. The box has a push button that plays the recording when pressed. At the previous school where she taught, whenever colleagues wanted to be reminded on how to say her name, they were able to press the button on the prototype and hear the pronunciation.

“Our names matter. Who we are matters. I know people are respectful; it’s just that they were afraid to keep asking,” she said. “That’s a general truth in life. I believe that given a safe space and support, people want to learn even the most daunting things. So with this name-box creation, I want people to know that I saw something that was a challenge, and I did something about it.”

For more than a decade, Ms. Chaplot has championed STEM and education through her work; she has received honors such as Silicon Valley Business Journal’s “100 Women of Influence”, UC San Diego’s “40 Alumni Under 40” and inclusion in Vogue India’s story on women working in Silicon Valley.

One of her many varied interests is that she enjoys finding number patterns in seemingly trivial things, such as dates and license plates. Ms. Chaplot draws and writes about the connections she finds, and on social media she is known to her followers as someone who can explain the beauty of mathematics. Finding significance in everything is a big deal to Ms. Chaplot. Fiercely believing in her purpose to always lift others up, Ms. Chaplot wants her students to know that they are able to accomplish so much.

“I want everyone to see how capable they are because that's when we can make positive, impactful contributions to our society and make change happen,” she said. “It’s not about one person doing it all. Every person has a role to play.”