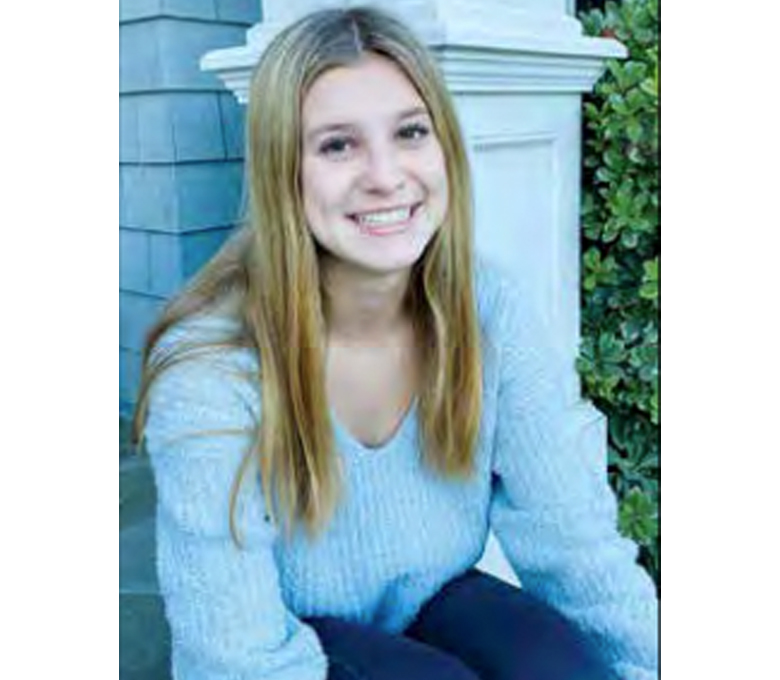 Junior Riley Simonsen was named a Los Altan of the Year for her focus on mental health. The following story was published in the January 6, 2021, issue of Los Altos Town Crier.

Modeled after Time Magazine’s annual honor, the Town Crier’s Los Altans of the Year, now in its 26th year, recognizes local residents who have spread goodwill through their good deeds, enhancing Los Altos’ reputation as a community.

Typically, the honors have gone to older recipients with a long, demonstrated record of volunteerism and impact. But 2020 was no typical year. It has forced us to see and do things differently.

We were struck by how many of our “heroes” were young people who really stepped up and made a difference. They did so despite dealing with their own challenges with remote education, cancellation of school sports and a host of other unprecedented obstacles.

Throughout the year, the Town Crier ran numerous stories of young people doing everything from delivering groceries to isolated seniors to counseling fellow students through personal crises. Regrettably, there are far more who deserve recognition than we have space for.

We ultimately selected five young recipients in three distinct categories: Angelina Lue for her COVID response; Riley Simonsen and Kelly Lam for their focus on mental health; and Kenan Moos and Kiyoshi Taylor for advocating for racial justice.

Riley Simonsen describes herself as a “very sociable person,” the kind of social butterfly friends have gravitated toward and turned to for advice about mental health or family quarrels since her St. Simon Parish middle school days.

About the time Simonsen progressed to St. Francis High, however, she realized some problems were too heavy for her to handle alone. With the goal of learning how to do more, she approached the Community Health Awareness Council (CHAC) in the midst of the COVID-19 pandemic and joined the Mountain View organization’s Teen Advisory Council (TAC).

“I decided to join CHAC and specifically TAC because I think that the services they provide are really inspiring and really helpful to people,” the St. Francis High junior said. “And I thought it would be a good way to help people when I can’t do it personally anymore.”

Like fellow Los Altan of the Year honoree Kelly Lam, 16-year-old Simonsen has assisted with developing CHAC’s new buddy program. The plan is to match up mentors like Lam and Simonsen with elementary school students who share similar interests. They meet approximately once a month in a virtual manner – at least until the pandemic subsides.

“It’s always really fun to have people who are older than you say, ‘Oh, yeah. I’m friends with this person,’” Simonsen said. “It kind of makes the little kids feel cool to have somebody older. I’ve definitely thought it would be really fun to be that person for somebody. Because I know when I was younger, those older people who paid attention to me, I always found really cool and really valued them in my life. So I hope to be the same for some elementary school student.”

Although Simonsen is a recent addition to TAC, she has eagerly adapted and contributed to the group, according to Amrita Bassi, lead CHAC therapist and co-facilitator of TAC.

“She always has input, positive input,” Bassi said. “She’s always picking up the other members just by positive comments. The positivity is always there. She screams positivity. And that’s pretty awesome given the circumstances in our world and given her age. She’s just a breath of fresh air, for sure.”

In addition to CHAC, Simonsen is part of a teen advisory group for Lyftly, a Los Gatos-based company that administers mental health and emotional support through an app. The app’s features include anonymous peer support, mood tracking, positive goal setting and journaling. Simonsen meets with Lyftly’s product development team and chief operating officer weekly to review new features, propose new ideas and discuss how everything is working.

“It’s great to feel that by using the app, responding to peers and improving the app, I am making a difference for mental health both on a local and national level,” she said.

Simonsen also works with Hope Services, a San Jose-based organization that helps people with developmental disabilities and mental health needs; serves as a teen docent for the Los Altos History Museum; and is a member of the California Scholarship Foundation, which recognizes and encourages academic achievement and community service among young people in the state. In her spare time, she plays competitive soccer through the MVLA Soccer Club.

“I’ve always liked to help people and be a resource for people,” she said. “So I thought nursing would be an interesting way to do that.”