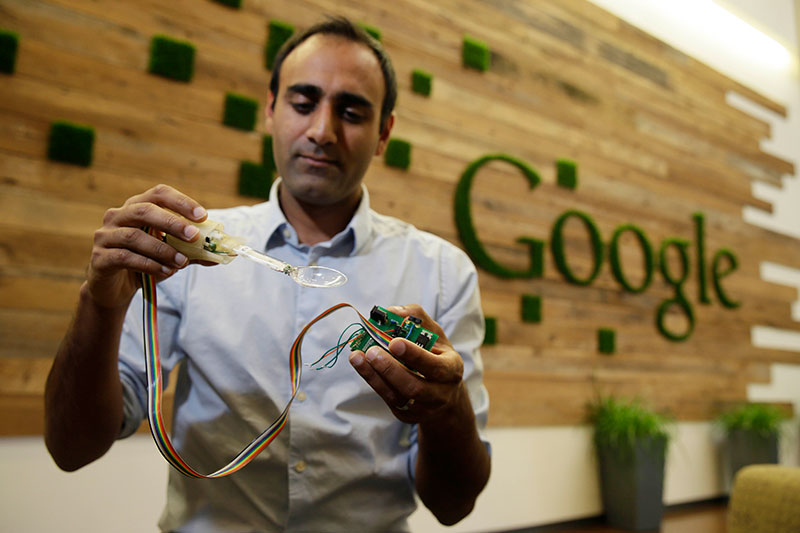 The humble spoon is the perfect tool for mixing and serving food, and its form factor of a shallow bowl with a handle suggests it has been an effective utensil since the beginning of time. It is hard to imagine how the spoon could possibly be improved upon, but for engineer and inventor Anupam Pathak ’00, that sentiment did not deter him from drastically thinking what else a spoon could do.

For more than 10 million people in the United States, eating with a spoon is nearly impossible because they struggle with Parkinson’s disease or essential tremor, a neurological disorder in which people’s hands involuntarily shake so uncontrollably they cannot feed themselves. Through the company he founded, Lift Labs, Mr. Pathak developed a high-tech spoon that counteracts these tremors.

The spoon, which is branded Liftware, uses motion sensors that compensate for a user’s unstable hand, so that the spoon moves in the opposite direction of the tremor. This balancing act is the same technique used in a digital camera’s image stabilization technology. The motion sensors are housed in the spoon’s handle and make 1,000 calculations per second to make adjustments to stay balanced.

The Liftware spoon does not cure the tremors, but it allows individuals who were once too embarrassed to eat in public to venture out to restaurants or their friends’ homes and eat independently. The idea for the spoon came about when Mr. Pathak was working on his doctorate in mechanical engineering at the University of Michigan, where he was studying methods to stabilize rifles for soldiers in combat. After meeting with a neurosurgeon, he discovered there was a huge medical need among people suffering from movement disorders.

“I thought that I could use some of my expertise to help in a dramatic way and wrote a grant proposal to the National Institutes of Health after I graduated,” Mr. Pathak said. “I was very fortunate that they agreed with my research and ideas. They decided to fund the project and my company.”

He and his collaborators spent a year testing the Liftware spoon and making prototypes, consulting with members of local essential tremor and Parkinson’s disease support groups. In 2014, Google acquired his startup.

“It was a mix of excitement and terror,” Mr. Pathak says of the time his product first hit the market. “When we received national exposure and our videos went viral, I realized this was something way beyond one product.”

The Liftware line now includes fork attachments, and Mr. Pathak serves as the lead engineer for the Liftware group at Google, researching ways to implement stabilization technology in other products. He remains driven to create products that have a social impact.

“Everyone should be encouraged to apply their skills in helping others in anyway they can,” he says. “It really gives me purpose to always think about whom I’m helping.”

Mr. Pathak’s interest in improving others’ welfare extends beyond his professional duties. He is the co-founder of the non-profit group Explorabox, which seeks to introduce science and engineering to children growing up in economic hardship by creating and distributing hands-on science kits and inviting them to inspirational presentations held at Bay Area companies.

“One big lesson I’ve learned, especially after seeing the huge education gap in the Bay Area, is how lucky I was to have attended a good high school with resources,” he says.

Mr. Pathak is thankful for how his educators at Saint Francis influenced him. His art teachers encouraged him to be expressive, and his math and science mentors, particularly Roger Johnson and Terry O’Donnell, helped nurture his curiosity and cultivated his logical thinking skills.

“I think it’s so important to stress both form and function as people develop, and I have my early teachers to thank for that,” says Mr. Pathak.