The Art of Science 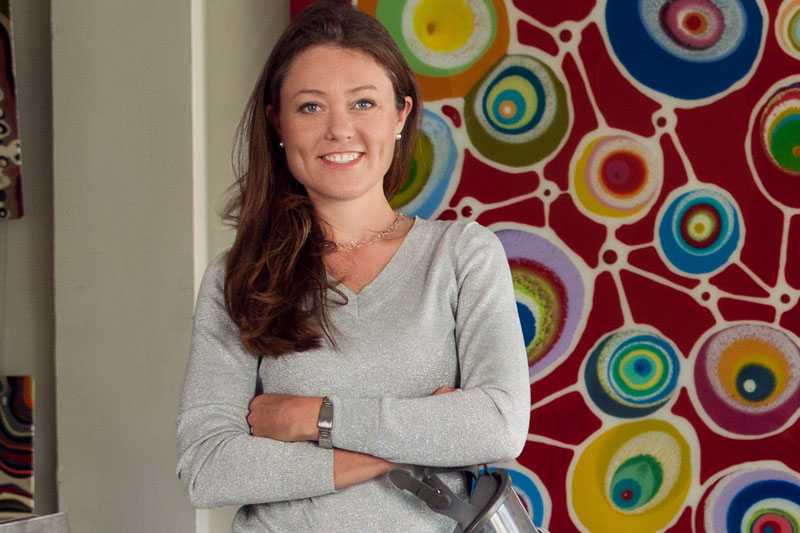 Artist Klari Reis ’95 is a master of color—with unconventional ways. In her creative hands, a mundane material typically used to create flooring explodes into an array of hues that smear and stain her canvas—a petri dish, in this case.

Ms. Reis’ petri dish paintings intentionally call to mind the cellular movements a scientist might see under a microscope. She is an artist who operates at the intersection of art and science, and all of her work, which includes collections beyond her petri dish paintings, evoke cellular life.

Her medium of choice is epoxy polymer, a honey-like substance that dries with a shiny finish. In her studio, she resembles an experimenting scientist, coaxing her tools and materials to create something new. She pigments the epoxy with powders, oils, acrylics and industrial dyes. With the aid of a spoon, pipette, blow torch or hairdryer, the colors spread and seep into one another in the petri dish, taking on the forms of inky blobs, translucent petals or delicate cobwebs. A bacterial colony never looked so beautiful.

“My goal is to have a new reaction happen and have each dish look different from the previous, which makes every day new and interesting,” says Ms. Reis, who went by her first name Kristen while at Saint Francis. “I’m not trying to do the same thing twice.”

Ms. Reis received her master's degree in architectural design from UC Davis but found that her inspiration lay at the microscopic level when she was diagnosed with Crohn’s disease more than a decade ago. While at the City and Guilds of London Art School, where she was pursuing a second master’s degree, in painting, her doctor showed her what her cells looked like as they reacted with different types of medication. The fluorescent colors used to highlight cell elements instantly captured her imagination.

Upon her return to San Francisco, she took advantage of her proximity to biomedical companies, who granted access to their microscope labs where she could view cellular images. But over the years, as she has perfected her unique techniques, her interpretations have gotten looser.

“My first 100 paintings were really trying to depict exactly what I was seeing under the microscope, whereas nowadays I feel I’m inspired by those shapes, colors and movements,” she says.

She posts a new dish painting every day on her blog A Daily Dish, and each has a whimsical name, like “Sorbet Au Lait” and “Zen Garden on Pluto.” The playful way in which she presents her art gives a glimpse of the wonder she sees in the relationship between science, specifically biotechnology, and art.

“What I do is look at biotechnology and microbiology advances as something positive and inspiring for the future,” she says. “I think about how many people have been healed by biotechnology and the people who are hoping and banking on its future.”

Ms. Reis’ take on science and art has attracted the attention of the science community. Just this March, her work was installed in the newly-constructed Kaiser Permanente medical office building in the Mission Bay neighborhood of San Francisco. Her work has also been featured in the journal American Society for Biochemistry and Molecular Biology.

“People in the science community really like the crossover of art and science,” she says. “Many times, scientists are people who are trying to create new things. I can see how my artwork may possibly inspire a biologist just as a biologist’s work definitely inspires my work.”

Ms. Reis has had her work exhibited throughout the world, but she did not always think that she would make it as an artist. She did not receive traditional fine arts training, though she did take art classes in college and at Saint Francis from teacher Sylvan Adams, with whom she happily still keeps in contact.